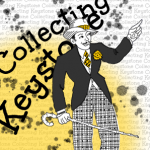 So what is it about toy collecting that makes us become “obsessive”?  Is it mainly that the items we covet come along less often than the items we want from the local store?  I know I often utter the words “I may never see this again” or “this is a rarity” to my wife.  Both of which never seem to persuade her.  But what really amazes me is the constant thoughts about a toy once I have discovered it.  I think about owning it day and night.  As soon as I have a moment for random thoughts there the toy is again.  Where will it go on display, more realistically the thought is where do I have room for it, does it need any cleaning or repairs when I receive it etc.  Then there is the elation when the toy is received.  I unwrap it with care, do a through inspection then check the package multiple times to see if there is a part lurking in the packaging.  It gets a light cleaning, the advantage of wooden toys, then straight up to find its new home.  I will look at the toy, maybe do a comparison to similar toys, then find reasons to pass by and take a peak several times over the course of the day.  After a few days the need starts all over again and I hunt for another toy to add to my collection.  I won’t even mention the feelings of losing an auction toy or passing on one and regretting it right after.  We all know that feeling too well!  I think that if I described this pattern to a therapist they would utter “obsessive compulsive disorder” and pull out the script pad.  But this is one “disease” that I will happily let go untreated!