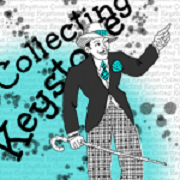 I have in my collection two ferry boats that came with a plastic car.  Both have boxes showing a plastic car and the cars were identical.  The interesting thing is they were marked with a Thomas Mfg. logo.  When I purchased the first one I assumed that someone had just tossed in a plastic car and I put into a box of toys to sell.  When I bought the second ferry boat and found the same car I knew it couldn’t be a coincidence.  I retrieved the first car, that didn’t sell thankfully, looked the two over and started to scratch my head.  These Thomas Mfg. cars were very similar in design to earlier plastic cars that are marked Keystone.  After some research on the internet I contacted Bill Hanlon who is an expert on Thomas Mfg.  He confirmed that Thomas Mfg. was contracted by Keystone to provide plastic vehicles for the early postwar toys.  Bill also mentioned that this was not the first time that there was a business relationship between the two companies.  So if you come across a Keystone toy that has a Thomas Mfg. plastic vehicles with it don’t get rid of it like I almost did.  It is correct to the toy!  I would be hesitant to get rid of a plastic vehicle that is marked Acme also as this was a company that was part of the Thomas Mfg. story.  If you would like to learn more about these plastic vehicles and more take a look at Bill Hanlon’s website U.S. Dimestore.